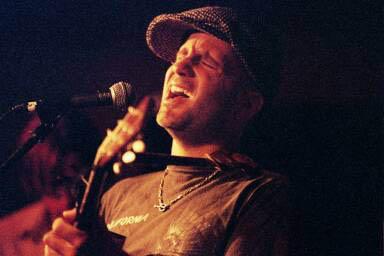 We all know him from the Donnie Darko soundtrack. It was his cover of Mad World, a Tears for Fears classic, which first put Gary on the map whether or not it sounds like an R.E.M. original. For the record, at first listen to this track, I couldn't tell his voice from Michael Stipe's if my life depended on it.

All covers and famous Georgian voices aside Gary Jules has finally begun making an impact on his own. His career started off rough as he was bounced around, and largely lost, in the shuffle of merging labels. For the last few years, with the exception of his massive success in England, Gary has largely been flying under the radar here in the states. All this is set to change with his latest self titled LP.

He sounds a bit musically like Jack Johnson at times, if Jack was fused together with a southern folk singer's voice. On his website, as well as his myspace account, Gary includes a quote from a fan's critique of him. And with this quote I agree. "[Gary has] a soulful voice . . like whispery life-soundtrack music for grown-up indie kids." What more could you want? 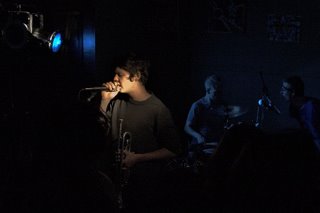 Beirut is a up and coming two thousand and six band that sounds a lot like other moderns sounds [Jens Lekman, Sufjan Stevens, and The Walkmen come to mind] while consistently striking out in their own direction. Their debut album, Gulag Orkestar, was released on May 9th of this year via Ba Da Bing records and their label had this to say.

"While it may sound like an entire Balkan gypsy orchestra playing modern songs as mournful ballads and upbeat marches, Beirut's first album, Gulag Orkestar, is largely the work of one 19-year-old Albuquerque native, Zach Condon..."

And a thousand kudos go to you Mr. Condon. What is found on his debut album is largely a mournful gypsy orchestra that is captivating and ethereal. And due to an unfortunate name for his band they're also extremely difficult to find online. As such I've included all the links you'll need. I only aim to serve.


buy Gulag Orkestar on Amazon for 13.99
Posted by The World Forgot at 12:36 PM No comments: Links to this post

In lieu of a new post [basically my filehost is still down. lame] I am copying and pasting a recent email I received. Please, if you don't know anything about Net Neutrality take a moment and inform yourself. www.savetheinternet.com

Below is an email I received today. We really can make a difference in only two minutes.


Today, Congress begins its August recess while legislative debates continue to heat up that will shape our media for generations. Here's an update on where things stand.

Over the past three months, our SavetheInternet.com campaign has elevated the crucial issue of Net Neutrality from obscurity and thrown a wrench in the phone and cable giants' plan to overhaul our telecommunications laws behind closed doors.

While on its face Net Neutrality - along with most policy issues - are wonky, at the end of the day they are about getting critical, independent journalism into living rooms in every state - red and blue. It's about limiting the undue influence and control of the largest media conglomerates, and creating vibrant and fearless noncommercial media that provide a real alternative to commercial media.

The unprecedented http://www.SavetheInternet.com campaign has brought together more than 750 groups from across the political spectrum. More than a million of you signed petitions and flooded Congress with calls and letters.

Tens of thousands of bloggers and MySpace users have linked to SavetheInternet.com - many of them posting free ads to counteract the multi-million-dollar misinformation campaign launched by astroturf (fake grassroots) groups like Hands Off the Internet. Creative people have submitted their own videos and songs about Net Neutrality -- and no corporation paid them to do it. (http://www.savetheinternet.com/=videos)

A bad telecom bill passed the House in June. But the Senate is split over Net Neutrality - as seen in the 11-11 tie vote in the Senate committee that oversees the Internet. The phone and cable lobbyists don't yet have the votes to move their bill forward - and chatter in Washington says it may not be voted on until after the November elections.

If we can keep the pressure up, it is believed that Net Neutrality could derail the entire bill and force Congress to start from scratch from next year. As always, we'll be tracking this and asking for your help.

On our other fronts...

You couldn't paint a clearer picture of how media policy gets made in Washington than this photo from Details magazine of FCC Chairman Kevin Martin literally in bed with industry lobbyists.

Such slumber parties might explain why Martin recently launched his latest attempt to remove the last remaining media ownership limits. Acting under pressure from powerful media corporations, Martin seems determined to let one company swallow up three TV channels, eight radio stations and the daily newspaper all in the same town.

Martin's indifferent to the impact such changes would have on localism and diversity - not to mention the fact that 95 percent of public comments received by the FCC oppose weakening the rules.

The current timeline puts any actual vote at the FCC after the November election. Before then, Martin has pledged to hold "a half dozen" public hearings - but he hasn't yet scheduled a single one.

However, Free Press and our allies continue to organize a series of Town Meetings on the Future of Media. And along with staunch opponents of media consolidation such as FCC Commissioners Michael Copps and Jonathan Adelstein, we're gearing up for a fight this fall that will require all hands on deck. Check out http://www.StopBigMedia.com for the latest updates.

You probably remember Ken Tomlinson's crusade to counter "liberal advocacy journalism" at PBS and NPR. Public pressure forced him to resign as chairman of the Corporation for Public Broadcasting (CPB) amid charges that he misused power and injected his personal politics into the agency. But the partisan attack on public broadcasting continues.

Last month, President Bush nominated Warren Bell to the CPB board. He's a television sitcom producer who has described himself as "thoroughly conservative in ways that strike horror into the hearts of my Hollywood colleagues." Brazen partisanship - on either side of the aisle - has no place in the governance of public broadcasting. In fact, the CPB was established specifically to provide a firewall from political interference. We will challenge the confirmation of any brazen partisans nominated to the board.

Meanwhile, the House recently voted for a 23 percent cut in funding for the CPB. The Senate approved full funding, but the two bills will be reconciled in December behind closed doors. We will need to raise the volume and ensure that public broadcasting is protected. At the same time, we are working toward long-term reform that gets public broadcasting away from running the annual funding gauntlet.

That's where things are in a nutshell. Together we have managed to stop nearly every major threat from Big Media during the last three years. Together, we can not only stop the next attack, but advance a vision: more investigative, critical journalism; smarter entertainment, less commercialism - a media system that supports and nourishes democracy, rather than one that undermines it.

Thanks so much for being part of Free Press and the movement for media reform.


Posted by The World Forgot at 3:36 PM No comments: Links to this post

"We don't listen to bad music, neither should you."

Music is hosted here for a brief amount of time to allow readers and fellow bloggers to experience new music. Hopefully, by exposing the world to new sounds, it will generate income for the bands and labels that are mentioned. If you would like music taken down please feel free to contact us at our provided contact email address.